With less then 24 hrs before my 1st sprint triathlon my nerves began to kick in. My sister and dad arrived at my house the night before. My sister Stacey would be joining me in the race, while Julie, our girls and my dad would be cheering us on from the sidelines.


We decided to arrive at the race early to get settled and prep ourselves before the start. As we parked our cars, we realized we weren’t the only competitors with the same idea.  This wasn’t like the ultramarathons I’ve been used to running over the last 10 years.  This race would have more competitors than any other ultra-race I’d competed in. We brought our bikes and gear to the transition area and went to check-in. Guelph Lake Triathlon was well organized. As a first timer, it was easy to navigate: Look up your race number on a board, pick up your race bib and swag, get your arms and legs marked up with age and race number and then head back to the transition area to do some final prep work and warm up.

Stacey and I were on opposite ends of the transition area, so it took a bit of time to find each other before heading down to the water. The transition area was on top of a hill, over looking the water, which had the swim course marked with buoys. Walking down the hill we could see swimmers warming up by completing the actual whole swim course (750m). As a non-swimmer, I was quite amazed that these racers were going that far in the water before the race. With our wetsuits, swim cap and goggles on, we had a little time to have a swim warmup ourselves.

I was in the 2nd wave of swimmers and Stacey was in the 4th wave. This helps to spread out the competitors. Once my wave began, I took in some water at 25-50 meters and couldn’t really regain composure. Then halfway through the swim, my goggles fogged up. So I stopped mid swim, took them off to wipe them clean and then put them back on. Not an easy task for me and something I definitely need to practice, just in case it happens again. I swam the majority of the swim on my back, which I was not proud of. But I did make it out of the water and up the hill to transition. Out of the water, I had a strong feeling of relief, I survived the swim. Off to the next discipline! 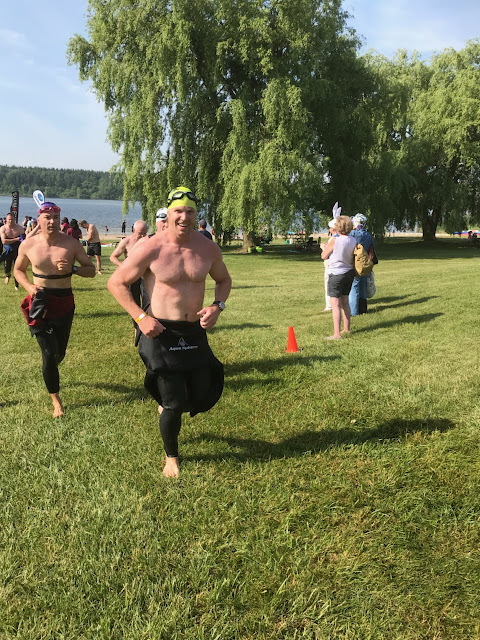 At my bike, I noticed I was the last to make it out of the transition area out of the guys that were using the same bike rack. I quickly got out of my wetsuit and put my bike shoes on. Once on the bike (outside of the transition area) I knew things would only start to go better as the race went on. It would be a 20km bike ride, on an out and back course. The 1st 5km of road was extremely bumpy, but overall an easy bike ride. I felt confident on the bike and passed a lot of riders. I went hard, but kept a little left in the tank for the run.

After making it through the 2nd transition quickly, I started to get into a rhythm. Running is by far my best discipline in a triathlon. I picked a quick steady pace and just ran. It was a 5km run, so I knew it would be fast. There were a few small hills, but nothing that wasn’t runnable. Checking my GPS watch halfway through the run, I could see that I was going to have a fast run and I just needed to enjoy the rest of the race.  The last 100 meters of the run was all downhill, which makes for a nice easy finish. 1:36:19 for my 1st sprint triathlon. Not bad, but lots of room for improvement. 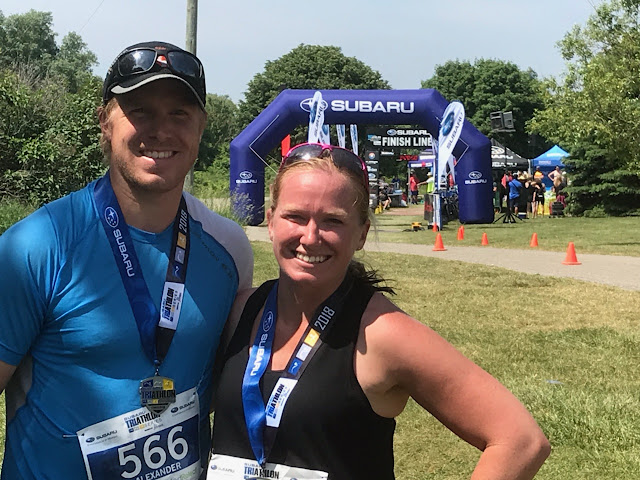 Overall the 2018 Guelph Lake Sprint Triathlon was a lot of fun. It was well organized, the weather was amazing and volunteers were great. I can’t wait to compete there again next year!
I want to Thank my wife, Julie and my girls, Emilia and Michela for helping me train for my 1st sprint triathlon. You made training enjoyable!
Posted by Alex Lalonde at 9:42 AM 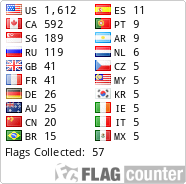